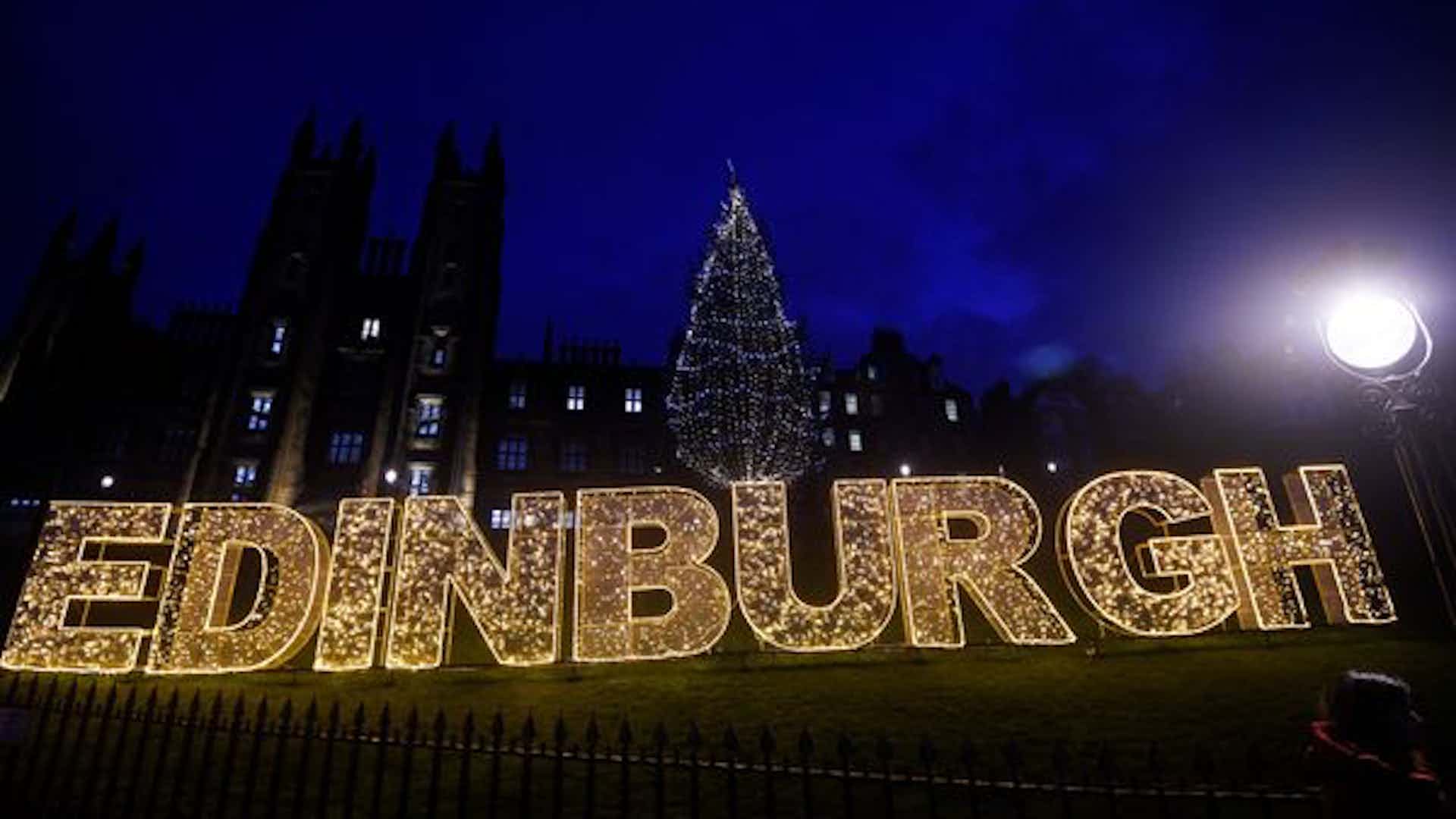 Hire Space Gets Festive In Edinburgh

With Christmas on the horizon, there aren't many better places to get you feeling festive than in the crisp air of a beautiful, historic city, decked out with Christmas markets and lights. And you don't have to travel far from home to find the perfect atmosphere!

We had an incredible time exploring all that the city has to offer, from dramatic, centuries-old skylines to state-of-the-art conference facilities, and we were blown away by the scope of events in the city.

Here’s what we got up to, and why Edinburgh should be at the top of your list for your next event (it’s definitely on the rest of our team’s bucket lists)!

It's Just A (Jaw-dropping) Train Journey Away

It might be across the border, but getting to Edinburgh couldn't be easier - with trains, planes, and buses all making the trip easy from England, Europe and further afield, it's a piece of (Christmas) cake! And the journey by train from King's Cross Station is an event in itself, passing through stunning scenery all the way.

We headed north in the First Class carriage of an LNER service which took just under 4 and a half hours. The train was comfortable and there was a festive atmosphere in the group as soon as we left King's Cross - especially when the hot drinks and bacon rolls came round! Travelling by train can be a great way to introduce your attendees and set the tone for an event, and of course, you're able to fire off last minute emails on the way!

The Accommodation Is Second-To-None

Edinburgh is known for its world-class hospitality, but we were still massively impressed by the range of fantastic hotel options on offer. As a city that sees over 5 million visitors a year, it's well-equipped for welcoming travellers in various forms of accommodation, from apartments to luxury suites, throughout its charming Old Town and stylish Georgian New Town.

The group stayed in a selection of five-star hotels based around the city centre, with Jess staying in the Waldorf Astoria and Jake in Cheval Old Town Chambers apartments. We were both spoilt with our views - Jake looked out onto the Royal Mile (where he was also serenaded by fiddlers and an opera singer outside in the evening), while Jess had a perfectly framed view of the castle from her window. 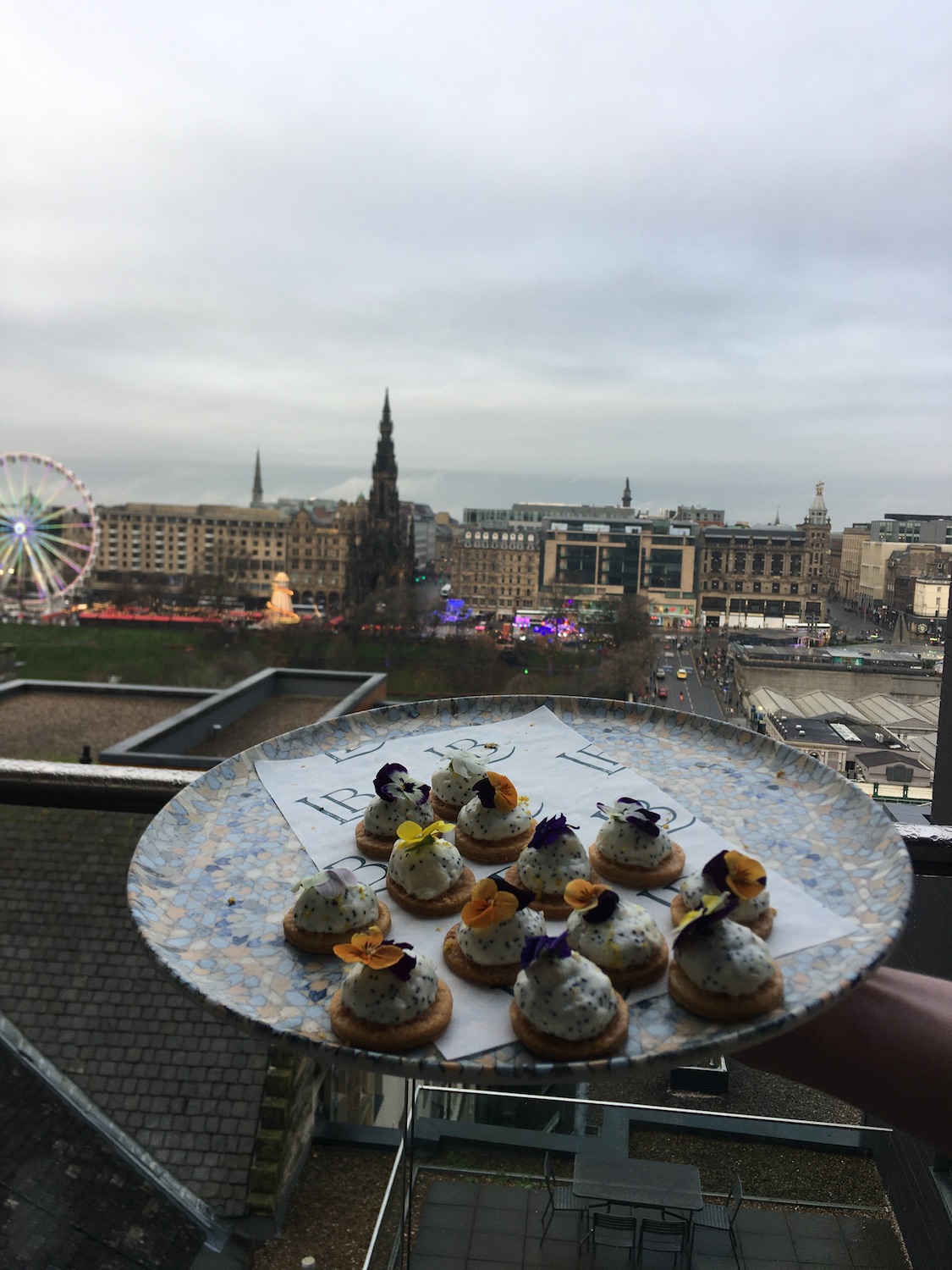 Left: the view of the castle from the Waldorf Astoria; Right: Princes Street from Cheval Old Town Chambers

The Event Venues Are World-Class

And it’s not only the accommodation that sparkles - the venues dotted around the city’s vibrant and beautiful centre are in a class of their own. From the grand and elegant to the new and futuristic, there's something to suit every event.

Even better, we found that the events community within Edinburgh is really collaborative, and event enquiries are often shared between venues belonging to different groups to find the best fit for the clients. Here are some of the fabulous spots we saw on our whirlwind tour.

The Edinburgh International Conference Centre - or EICC, as it’s known, is one of the most impressive conference venues we’ve been to. Its Pentland Auditorium seats 600, but connects to two additional auditoriums to increase the capacity to 1200. And there are no folding walls involved - the smaller auditoriums are set on turn-tables so that they can spin around and become part of the larger space!

Meanwhile its Lennox Suite features tiered floors which allow it to host 2,000 in raked seating, 1,400 in arena style, or 750 cabaret, with tiered levels for tables. This venue has hosted 2 US presidents (Bill Clinton and Barack Obama), as well as George Clooney, Michelle Obama and countless other high profiles names, and is just a few steps from the Sheraton Hotel so that speakers and guests can move between the venues with ease.

The venue is also making ripples in the sustainability sector, with initiatives to reduce its impact across environmental and social areas. And for events held in the venue, the team can also produce an impact report to assess the event's sustainability and social impact, and give pointers on where to focus efforts the next time. 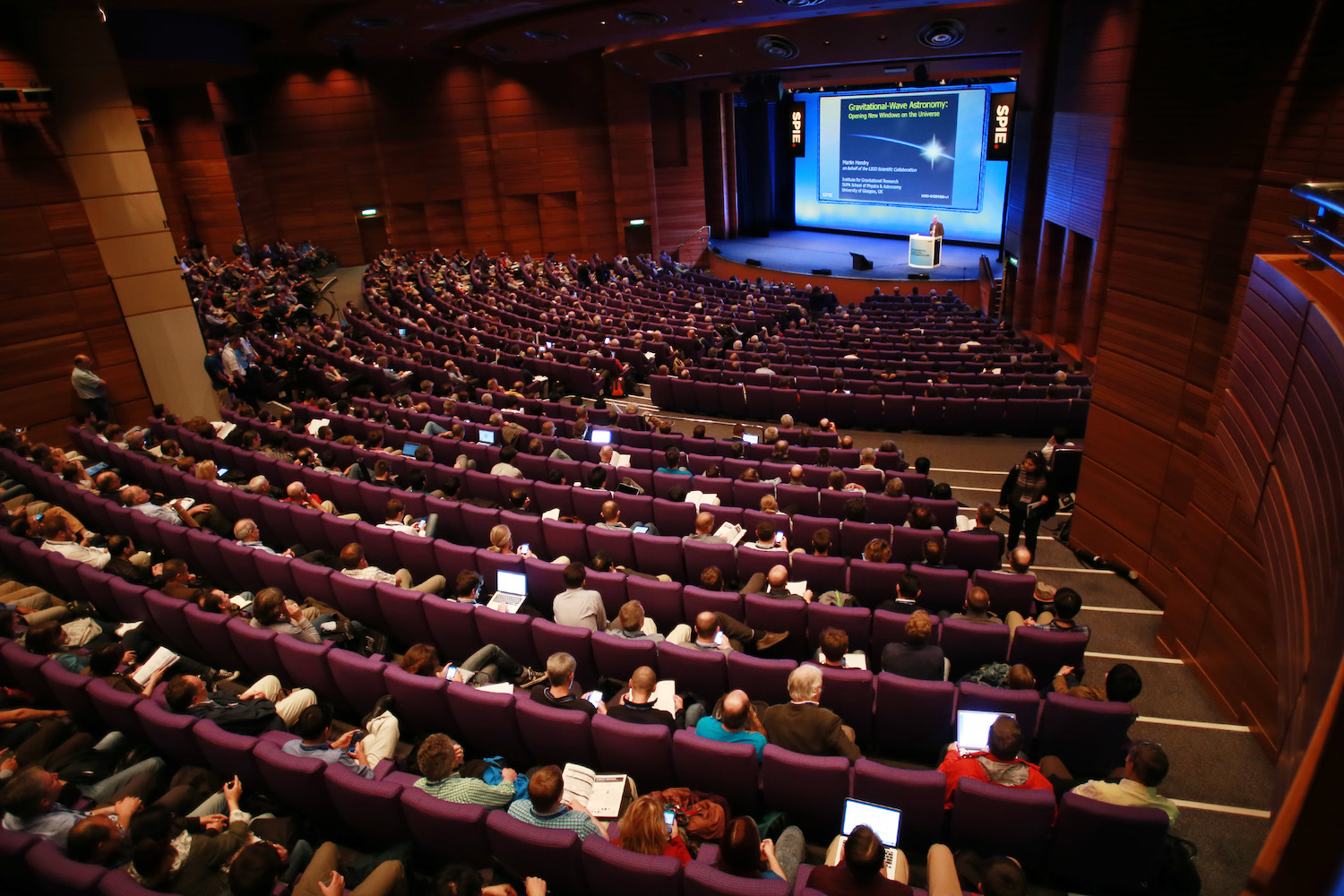 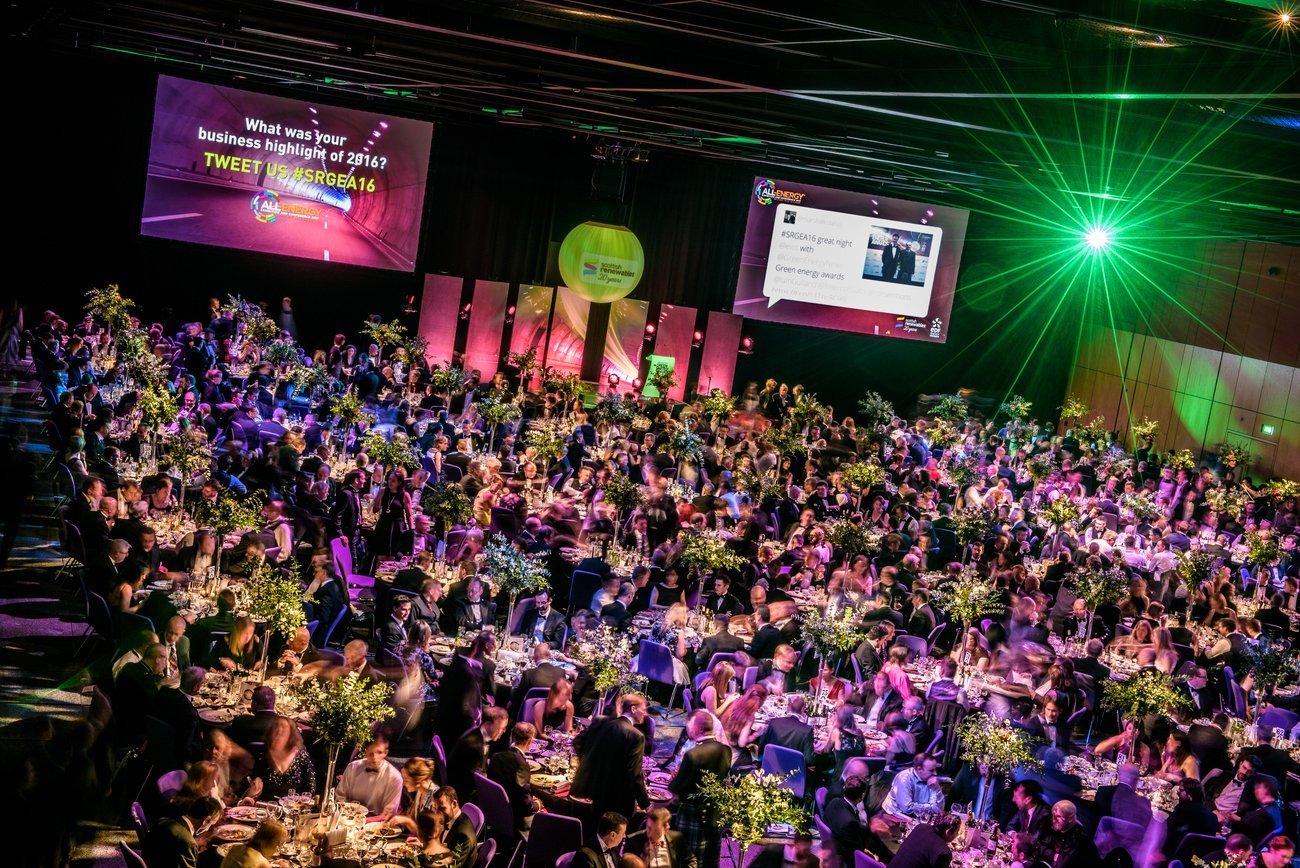 Sleek and stylish, with excellent facilities and beautiful event spaces, The Sheraton is an icon of Edinburgh’s West End. We enjoyed a champagne reception here one evening, surrounded by gilded mirrors, before heading to the EICC, just a short walk away across conference square!

A true gem of Edinburgh, the Waldorf Astoria features several beautifully-appointed event spaces, from the regal Versailles Room, to Peacock Alley - once the bustling departure hall of the area’s train station, and now a stunning space with nods to its past, including the original station clock and sandstone facade.

This hotel and event space is again only minutes from the EICC, making it an ideal base for networking drinks, dinner dances and more, once your conference wraps up. And its spaces are really one-of-a-kind for sophisticated dinners, conferences, and more. 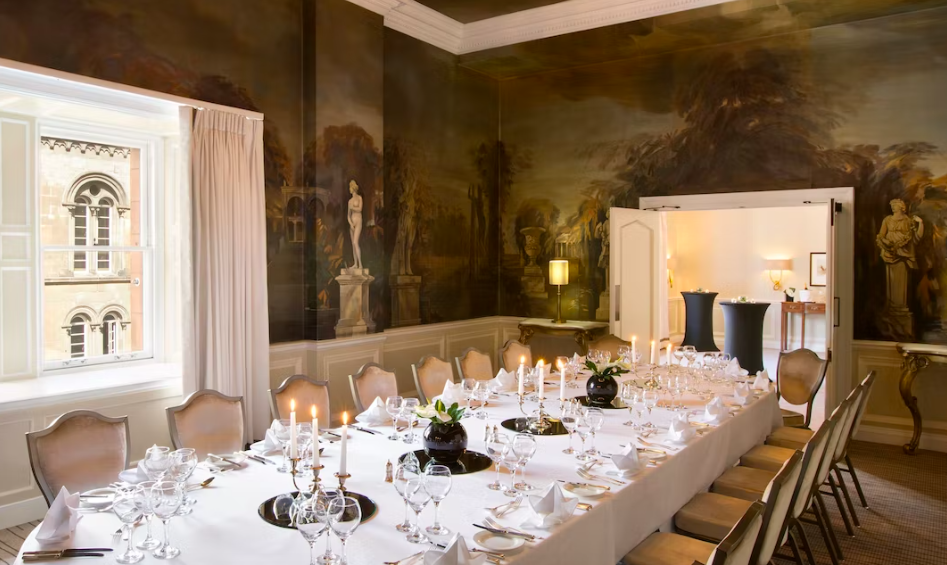 The National Museum of Scotland

Edinburgh’s National Museum of Scotland is one of the most most visually-arresting venues on offer in the city, with an incredible 80-foot high, arched ceiling, and 360 degree balcony. Its Rooftops event space offers a fantastic view of the castle and city skyline from a private, self-contained room. We had a delicious lunch in the space, provided by the venue’s preferred caterers Benugo, who sourced every ingredient (including coconuts!) from within a 100 mile radius.

A quick windy trip onto the real rooftop saw us taking in an amazing 360 degree view of the city, from the Pentland hills in the distance, to the eclectic buildings of the Grassmarket and Cowgate up close. 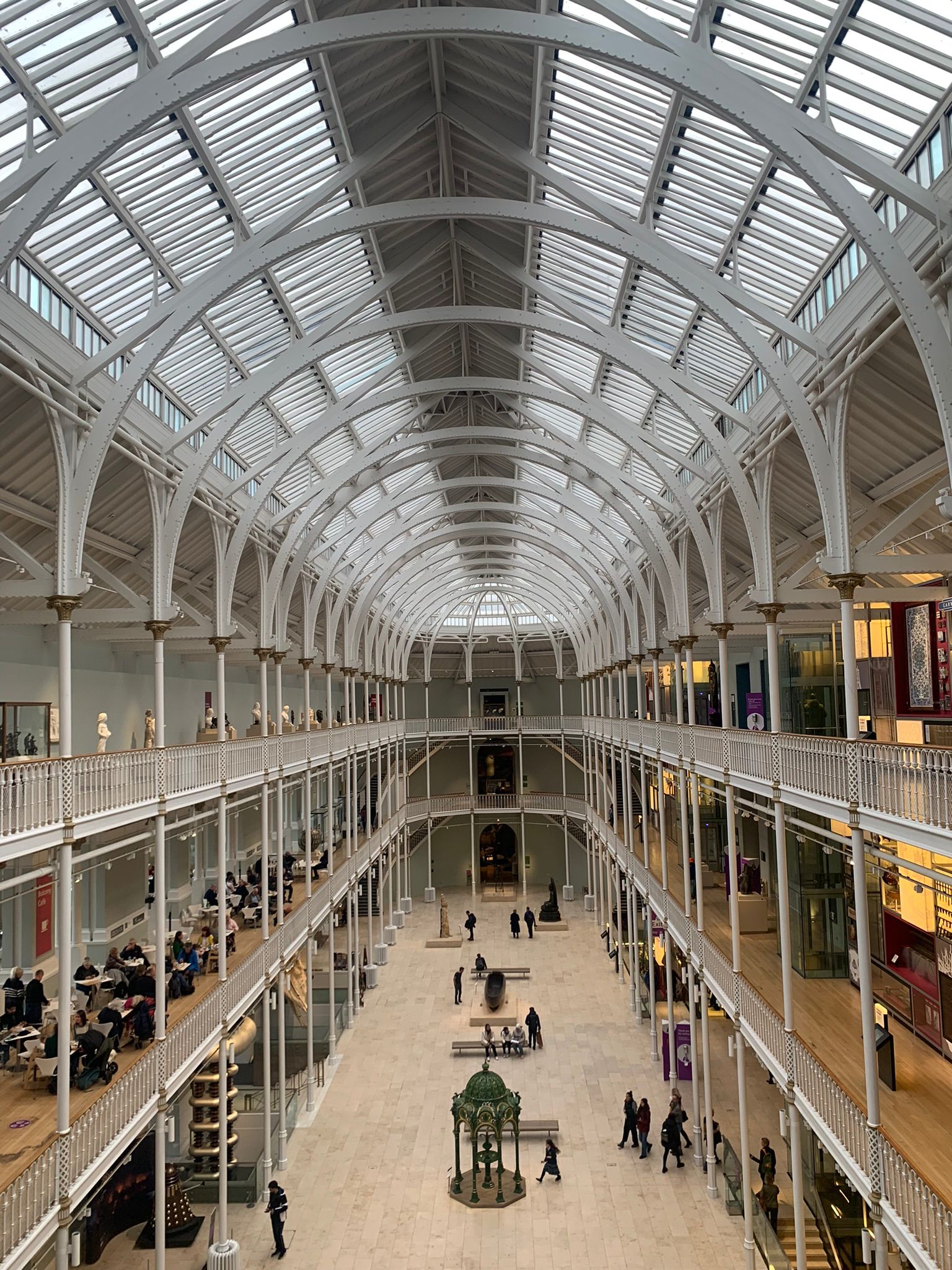 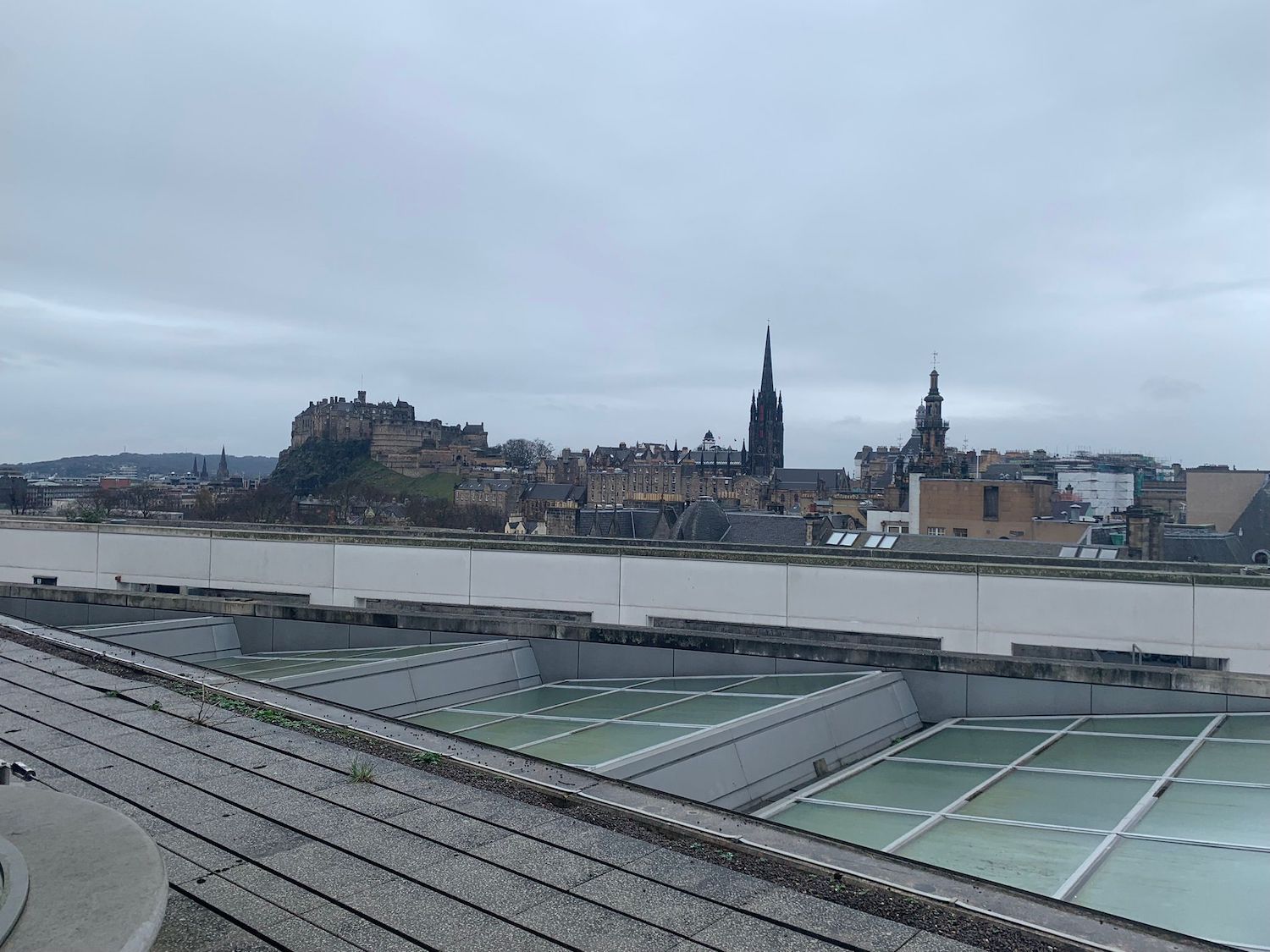 Left: National Museum of Scotland atrium; Right: The view from the Museum's roof

On our second night in the city, we attended a festive drinks reception at the beautiful Greyfriars Hall, a stunning converted church in the heart of Edinburgh’s cobbled Old Town. Its acoustics were perfect for an incredible saxophonist performance, a surprise singer, and a not-so-impressive rendition of the 12 days of Christmas by the visitors ourselves!

Perfect for networking drinks or a good old knees-up (a ceilidh if you're doing it the Scottish way!), this is a fantastic spot for an evening event right in the heart of the city.

The University of Edinburgh is one of Scotland’s four ancient universities, dating back to 1583, so it stands to reason that it would have some of the most impressive old buildings in the city under its mantle. We explored the beautiful Playfair Library, and took a quick jaunt to the stunning, domed McEwan Hall, a prestigious and historic venue for a large conference or awards ceremony.

To wrap up our trip, we headed to beautiful The Ghillie Dhu on Princes Street for a farewell brunch, and - what could be more fitting for a trip to Scotland - a bagpipe lesson (some of us had more success than others)! With huge windows and a spiral staircase, the venue has a real gothic vibe, made even better by the bagpipes in the background.

The Activity Options Are Fantastic

Aside from getting to check out the venues and event spaces during the day, we were lucky enough to experience some of the best activities that the city has to offer. With options ranging from whisky tastings to a trip to the Royal Yacht Britannia, tours of Mary King’s Close, and afternoon tea, we were spoilt for choice!

We took part in a fantastic guided tour run by the social enterprise Invisible Cities, which took us through the streets of Edinburgh’s famous Old Town, meandering through the historic Grassmarket and up to Greyfriars Church. Our tour guide, Sonny, had once been homeless, and we heard personal stories of his life on the streets and how the enterprise had helped him, as well as stories of Edinburgh's rich (and gristly!) history.

To dancing down festive streets

We also took part in a fantastic silent disco - a first for both of us, and certainly not the last - which led us down the Royal Mile and to the Christmas markets where we ended up high above the city on the ferris wheel. Dancing down the streets really brought out the smiles of our group and plenty of passers by!

And digging into the history

There are also plenty of options in Edinburgh for digging into the history and culture of Scotland, from ghost tours, to trips to the castle and Holyrood Palace (both well worth the while), and visits into the old underground closes (narrow streets with houses either side) to see how life used to be lived in the city.

And lots more activities to enjoy both indoors and out

With Arthur's Seat, Carlton Hill, the Scott Monument, and the beautiful Water of Leith walk, there's a huge amount to do outdoors in the city, making it perfect for an active convention. And if the weather's a bit 'dreich' as they say in Scotland, then you're equally spoilt for choice with places to visit indoors, from some of the UK's best galleries and museums, to a seemingly-endless number of cute and cosy pubs, restaurants, and tasting experiences, not to mention shops.

Why Edinburgh's The Perfect City For An Event Or Incentive Trip

We had a fantastic time exploring and discovering this beautiful part of the world, and we have no doubt it would be the perfect location for an event of any size. From small, corporate dinners boasting local Scottish fare and a dram or two of whisky, to impressive conferences at the EICC, attendees are guaranteed to have a whale of a time in Scotland's buzzing capital.

Adventures on your doorstep

Different enough to feel really exciting, but with easy transportation links that make getting there a breeze, it's the perfect balance of accessible and novel for any company trip. With fantastic conference and social event venues, and a plethora of activities to get stuck into in spare time, attendees are guaranteed to go home feeling refreshed and inspired, and remember the event for years to come.

Find out more about what makes Edinburgh the perfect city for an event.

A new initiative that's been launched in the city is the BEST (Business Events Shaping Tomorrow) tool, which is designed to measure the positive impact events can bring to Edinburgh, particularly to the community. It will cover many of the hotels and venues we visited, including the EICC, National Museum of Scotland, and the University of Edinburgh's venues.

The collaborative spirit of the city makes it the perfect place to make sure your events are having a positive impact, and give something back to the people who live there.

It's high time we discovered the gems on our doorstep - with its wild surroundings contrasting with the city's contemporary, cosmopolitan feel, an escape to Edinburgh is a breath of fresh air. We can't wait to go back!

To find out more about hosting your next event in Edinburgh, get in touch with us today! 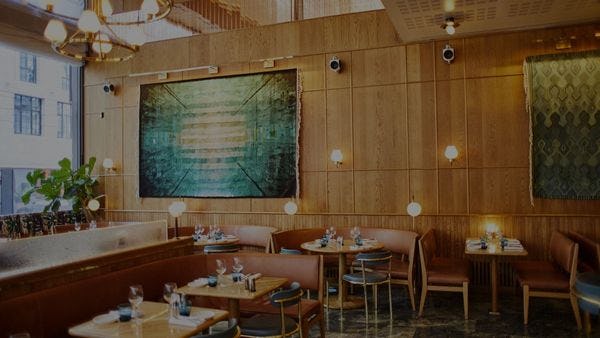 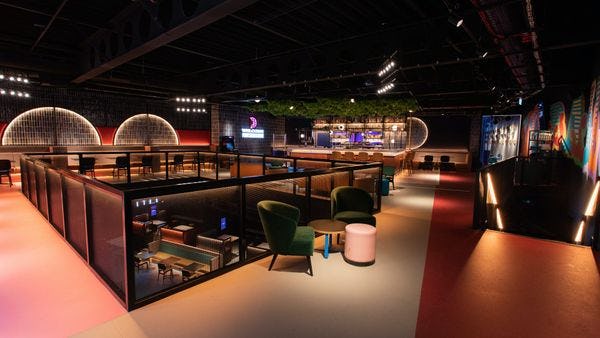 If you're looking to get your team into the swing of the new year, we've got the perfect place up our sleeve - introducing TOCA Social, the interactive activity venue that's taken London by storm! Here's why it's a top scorer for events.